Vertical production machines are EMAG's territory. It all began with the VSC series, which laid the foundation for the successful machine concept of the vertical pick-up turning center. This machine concept runs through nearly the entire product range of the manufacturer, and it takes on its latest form in the VL series.

VL machines are part of EMAG's modular standard series. As the term suggests, these machines are built on a common machine base but allow the use of an extremely wide range of technologies, similar to the modular platform systems seen in the automotive industry. There are now modular machines available for turning, gear hobbing, and chamfering processes; for grinding (chucked parts and shaft parts); for induction hardening; and also in special designs for laser welding or PECM technology. Essentially, they are available for virtually all the technologies offered by the EMAG Group.

The machine base of these modular machines is made out of Mineralit polymer concrete. This material has exceptional vibration damping properties, which is the basis for the machines' excellent process quality. The machine base supports a compound slide rest equipped with an X-axis and a Z-axis, which allows the working spindle to move. The working spindle is the heart of the pick-up automation system which is an essential part of every modular machine. It includes a parts storage unit in every machine, from which the pick-up spindle loads and unloads itself independently. This lowers non-productive time to an absolute minimum as there are only a few seconds between the machining processes. An optional measuring probe can be installed directly alongside the loading position, allowing time-optimized measuring of the parts. The designers have thought of everything to make these machines as efficient as possible.

The VL Series - the Modern Approach to Turning

The vertical pick-up turning centers of the VL series were developed particularly for the production of precise chucked parts. There are now five versions of the VL machine to cover the widest possible range of parts. The smallest machine is the VL 2, designed for chucked parts with a diameter of up to 100 mm. It is followed by the VL 4, VL 6, and VL 8 machines which allow for an increase of 100 mm in diameter with each model increase (see image). These additional models allow the VL series to cover workpieces up to 400 mm in diameter. Each VL machine is equipped with a tool turret with up to twelve (driven) tools for the machining of chucked parts. This turret is exceptionally dynamic; it's very fast indexing cuts non-productive time to a minimum, which in turn reduces cycle times. The machines can also be equipped with a Y-axis in the turret for the machining of complex shapes. This greatly expands the number of possible applications of the machines. The fifth machine in the set is the VL 3 DUO with dual spindle.

The VL 3 DUO is the first dual-spindle machine in the VL series. Its parts capacity places it between the VL 2 and VL 4, allowing high-productivity manufacturing of chucked parts with a diameter of up to 150 mm. It's no coincidence that the majority of transmission gearwheels fall into this size category. Every aspect of the VL 3 DUO has been designed for high-volume production, which makes it the ideal solution for the machining of gear blanks that have to be churned out by the millions. The VL 3 DUO is pure performance. Including the parts storage unit, the VL 3 DUO has a footprint of no more than 13 square meters. That space houses the automation system, the parts storage unit, and two complete machining areas, each with its own working spindle and its own 12-station tool turret. This machine is ideal for production in two clamping operations, machining both sides of a workpiece in OP 10 and OP 20, respectively. Of course, the part needs to be flipped over between the two operations. With the TrackMotion automation system, EMAG has found an ingenious solution for this problem.

TrackMotion Modular Automation Solution for Modular Machines The TrackMotion automation system has been specially designed for modular machines and drastically simplifies the connecting of multiple machines. The example of the VL 3 DUO makes this very clear. The TrackMotion automation system is made up of two components: a track, which is a kind of rail routed behind the work area of the machines, and the TransLift, a gripper system that runs along on that rail. This NC gripper, which is programmed directly through the machine's control, provides the transportation of parts between the machines, as well as to and from the storage unit for raw and finished parts. The gripper has a Z-axis so it can also store the parts three-dimensionally, on top of each other, in stackers. This allows a huge number of parts to be stored in a very small space. The gripper also functions as a flip-over unit, turning the TrackMotion into a genuine all-purpose solution for the automation of modular machines.

EMAG's VL series of vertical pick-up turning centers offers a whole range of machines where everybody can find the perfect tool for their application. Whether as standalone machines, or linked with other modular machines, the VL series promises state-of-the-art production of chucked parts with top of the line quality, at rock-bottom unit cost. 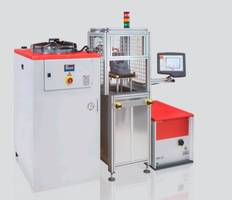 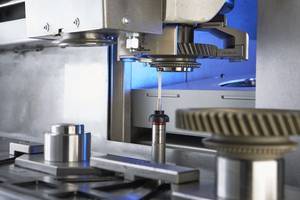