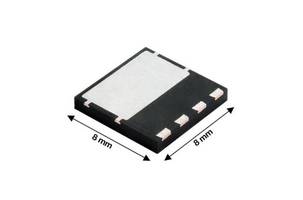 Vishay offers a broad line of MOSFET technologies that support all stages of the power conversion process, from high voltage inputs to the low voltage outputs required to power the latest high-tech equipment. With the SiHH070N60EF and upcoming devices in the fourth-generation 600 V EF Series family, the company is addressing the need for efficiency and power density improvements in two of the first stages of the power system architecture — totem-pole bridgeless power factor correction (PFC) and soft-switched DC/DC converter topologies.

Offered in the PowerPAK® 8x8 package, the device released today is RoHS-compliant, halogen-free, and designed to withstand overvoltage transients in avalanche mode with guaranteed limits through 100 % UIS testing.

Samples and production quantities of the SiHH070N60EF are available now, with lead times of 10 weeks. Pricing for U.S. delivery only starts at $3.14 per piece in 10,000-piece quantities.

Vishay manufactures one of the world's largest portfolios of discrete semiconductors and passive electronic components that are essential to innovative designs in the automotive, industrial, computing, consumer, telecommunications, military, aerospace, and medical markets. Serving customers worldwide, Vishay is The DNA of tech.™ Vishay Intertechnology, Inc. is a Fortune 1,000 Company listed on the NYSE (VSH). More on Vishay at www.Vishay.com.