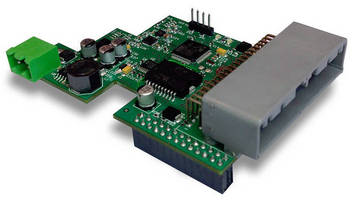 Stacked on top of 700 MHz Raspberry PI SBC, RIO (Raspberry I/O) creates 65 x 85 x 20 mm embedded control and navigation computer. It adds 13 inputs that can be configured as digital inputs, 0–5 V analog inputs with 12-bit resolution, or pulse inputs capable of pulse width, duty cycle, or frequency capture. Also, 8 digital outputs are provided for driving loads up to 1 A each at up to 24 V. Other features include 32-bit ARM Cortex M4 MCU, RS232 and TTL serial ports, and CANbus interface.


Scottsdale, AZ – Roboteq, Inc (www.roboteq.com) introduces the most versatile and capable I/O expansion card ever made for the ultra-popular Raspberry PI Single Board Computer.

Roboteq’s RIO - for Raspberry I/O - stacks on top the Raspberry to create an amazingly powerful embedded control and navigation computer, in a small footprint of just 65 x 85 x 20mm.  Thanks to RIO, the 700MHz Raspberry PI can now be used to create powerful and very cost effective solutions for use in robotics, industrial & home automation, data acquisition and control, or any other computing application requiring interfacing to the real world.

RIO significantly expands the Raspberry’s limited I/O capabilities by adding 13 inputs that can be configured as Digital inputs, as 0-5V Analog inputs with 12-bit resolution, or as Pulse inputs capable of pulse width, duty cycle or frequency capture. Eight Digital outputs are provided for driving loads up to 1A each at up to 24V.

RIO includes a 32-bit ARM Cortex M4 MCU for processing and buffering the I/O, and creating a seamless communication with the Raspberry. The RIO processor can be user-programmed using a simple but powerful Basic-like programming language to perform logic, conditioning and other processing of the I/O, in real time, and thus relieving the Raspberry of these low-level functions. On the Linux side, RIO comes with drivers and a function library for configuring and accessing the I/O quickly, and for seamlessly exchanging data with the Raspberry.

A version of RIO is available with motion sensors, including 3 axis accelerometer, 3 axis gyroscope, 3 axis magnetometer, and a fusion algorithm for creating a precise Attitude and Heading Reference System (AHRS). Added to Roboteq's extensive offering of motor controllers, the RIO-AHRS opens a world of applications in sea, land or airborne unmanned robotics vehicles applications.

The RIO card includes a DCDC converter for powering the Raspberry, RIO and external sensors, from a 8V to 30V DC power source.

RIO is available now from Roboteq and its resellers in two versions: RIO-BASIC for $85, and the RIO-AHRS for $175 in single quantity.

Detailed product information, including datasheet can be found at http://www.roboteq.com/index.php/products/navigation-computers/rio-ahrs-detail.

A video demonstration can be found at http://www.youtube.com/watch?feature=player_detailpage&v=cFqNjndLtqg

Founded in 2002 by experts in embedded computing and power electronics, Roboteq’s mission is to develop products and technologies that allow novices and professionals alike to build innovative, flexible and affordable mobile robots. Roboteq controllers are now used in over 3000 original robot designs around the world.
Share