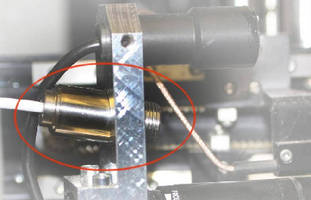 Based on VIVA Integrated Platform core hardware and software, AERIAL Flying Probers include 2 Flying IC Thermal Detection Units positioned on each side of unit under test to detect thermal parameters of ICs under power. Purpose is to compare temperatures of known good boards to suspect boards and indict bad components in depot repair environment. Models range from 2-8 test probes, accessing simultaneously one or both sides of board, which can be positioned horizontally or vertically.


Salem, New Hampshire,- Seica, Inc has just introduced "Flying IC Thermal Detection Units" on its line of Aerial flying probers. Two IC Thermal Detection Units, are positioned on each side of the unit under test to detect thermal parameters of ICs under power. The purpose is to compare temperatures of "known good" boards to "suspect" boards and indict bad components in the depot repair environment. Seica is the first flying prober OEM to introduce this feature on its line of flying probers. Introducing thermal sensors with the traditional features already present on flying probers, such as in-circuit, functional, boundary scan and power up test make the flying prober a continuing evolving test tool to satisfy the demanding test needs of the production and depot repair markets.

In the market today, there are instances of large 'bone piles' of boards that require many hours of debug and testing by skilled senior technicians or engineers to return them to operational condition. The IC Thermal Detection Unit capabilities allows for precise thermal measurement of the IC or other components while the part is powered up even under low voltage conditions. The simplicity of a thermal profile test can help reduce labor repair cost and improve inventory turnover.

More about the Pilot Line of Flying Probers:

The Pilot line is one of the world's most versatile and complete line of automatic flying probe test systems, offering the widest range of solutions and performances for flying probe test of electronic boards on the market today. Models range from 2 to 8 test probes, accessing simultaneously one or both sides of the board, which can be positioned either horizontally or vertically.

The AERIAL Prober is based on Seica's proprietary VIVA Integrated Platform
(VIP) core hardware and software. Designed with today's industry demands very much in mind, AERIAL's simple programming and operation mean it can be operated by specialist and non-specialist test personnel alike as part of a highly cost-effective test strategy.

This is in part due to four completely independent, mobile test probes, two on each side of the test board, that enable simultaneous, accurate double-sided testing, while Seica's proprietary OTPN (One Touch Per Net) technique quickly characterizes the net and identifies faults on subsequent test boards. Additional tests, such as junction fault verification, are executed at the same time, simplifying and speeding up test program generation and maximizing fault coverage and throughput.

Data collection and statistics functions come as standard, and the system's capabilities can be further expanded with optional in-circuit test and visual inspection software modules.

Through the VIP environment, the system is also fully compatible with Seica's PILOT Flying Probe, and its STRATEGY In-circuit and VALID Functional testers, making AERIAL even more versatile. All of this is packed into a compact yet easy-to-load system that, depending on the model, can accommodate large boards up to 24" x 20" in size.

Founded in 1986, Seica S.p.A. is a global supplier of automatic test equipment and selective soldering systems, with an installed base of more than 900 systems on four different continents. Seica offers a complete line of test solutions, including bed of nails and flying probe testers, able to perform MDA, in-circuit and full functional tests of assembled electronic boards and modules, and printed circuit boards, as well as laser-based selective soldering systems for electronic board manufacturing. Company headquarters are located in Strambino, Italy, with direct offices in France and USA, Germany and China, supported by a vast distribution network covering the rest of the world.

Seica's innovative solutions are being used across the globe to improve quality, increase productivity and save money in all areas of electronics manufacturing, including automotive, defense and consumer.