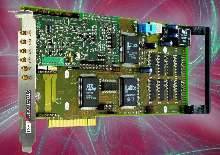 Boston ­ May 19, 2004: Strategic Test has released the UF6031 high-speed Arbitrary Waveform Generator (ARB/AWG) PCI card for PC's. Using the latest generation of 14-bit D/A converters it is able to generate complex analog signals at rates of 125 MSamples per second (MS/s) on both channels. To support these high data rates, the designers have included up to 512 MBytes of onboard signal memory that allows each channel to generate signals of up to 256 MSamples at the highest speeds. Three software selectable hardware filters are provided to further improve accurate signal reconstruction.

The UF6032 can be combined with one of the UltraFast Digitizer cards. Real-world signals can be recorded with the Digitizer and then replayed using the UF6031 to the device under test.

The UF6031 has a 3dB Bandwidth of 60 MHz (no filter), Signal to Noise Ratio of greater than 72 dB and Crosstalk less than -80 dB. Total Harmonic Distortion is better than -57 dB.

The boards are supplied with external clock and trigger connectors so that the card can be synchronized with external equipment if necessary. A feature called Bank Switching is provided for tests that require switching the channel output between two stored waveforms on receipt of an external signal.

As an option, the UF6031 can be fitted with four high-speed digital output channels, which are synchronized to the analog outputs. These may be used to send status messages to other equipment.

All UltraFast cards are supplied with free drivers for Windows and Linux, the SBench program that allows signals to be easily generated without programming, source code programming examples in Visual Basic, c/c++ and Delphi; two years hardware warranty and lifetime software updates including future Windows and Linux drivers. Technical support is provided at no cost for the product lifetime.

A picture and datasheet can be downloaded from the website at http://www.strategic-test.com/news