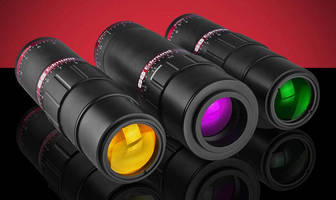 TECHSPEC Variable Beam Expanders use non-rotating internal translation and focusing mechanisms to continuously adjust magnification and laser divergence without any effect on the overall housing length. The compact design eliminates the need to make system accommodations for changes in length and simplifies system integration. It easily adjusts for laser beam divergence.

Please stop by Booth #2007 to see the TECHSPEC Variable Beam Expanders at CLEO, the Conference on Lasers and Electro-Optics, June 10-12, at the San Jose Convention Center, San Jose, CA.