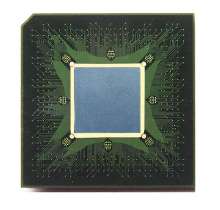 Estimated chip stress and solder bump strain for various underfills are illustrated in Figure 1. According to Art Burkhart, vice president of Marketing for semiconductor products at Henkel Loctite, "LSI Logic is the leader in high performance flip-chip packaging and we appreciate its support in developing and validating this breakthrough material."

Adoption of copper damascene metallization and improved inner layer dielectrics are key to achieving electrical performance for the latest generation of integrated circuits designed for 130 and 90-nanometer geometries. Implementation of high performance flip-chip packaging has become critical for these leading-edge chips, such as ASICs.

When fully cured, this product forms a rigid, low warpage seal that dissipates stress on solder joints and extends thermal cycling performance. Hysol® FP4580 is formulated to quickly underfill devices with gaps as small as 12 microns.

Since 1997, Henkel Loctite Corporation, formerly Loctite Corporation, headquartered in Düsseldorf, Germany, has been part of the Henkel Group. It operates in markets as diverse as electronics, automotive, aerospace, biomedical and general industry. Henkel is a leader in consumer brands and technologies. The branded business sectors are Laundry & Home Care, Cosmetics/Toiletries and Consumer and Craftsmen Adhesives. Henkel Technologies is the world market leader in Industrial Adhesives and Surface Technologies. The three systems businesses -- Henkel Industrial Adhesives and Sealants, Loctite Engineering Adhesives and Henkel Surface Technologies -- supported by their worldwide presence and strong technology base, are the pillars of Henkel Technologies' success. In Laundry & Home Care and in Cosmetics/Toiletries, Henkel holds a leading position in Europe. "Henkel - A Brand like a Friend": With strong brands and advanced technologies of superior quality and value Henkel makes people's lives easier, better and more beautiful. The company operates in more than 75 countries. In the first six months of 2003, Henkel Group generated sales of 4.7 billion euros and an operating profit (EBIT) of 348 million euros. A total of 48,490 employees work for Henkel on a worldwide basis.

LSI Logic Corporation is a leading designer and manufacturer of communications, consumer and storage semiconductors for applications that access, interconnect and store data, voice and video. In addition, the company supplies storage network solutions for the enterprise. LSI Logic is headquartered at 1621 Barber Lane, Milpitas, CA 95035. lsilogic.com/.
Share