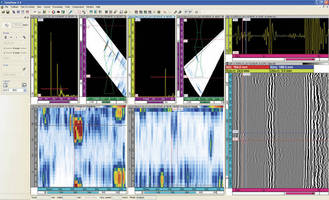 TomoView(TM) v2.9 manages acquisition of UT (ultrasonic testing) signals along with real-time imaging of signals and offline analysis of previously acquired data files. In addition to moving detection gates in Analysis (off-line) mode, functionality allows DGS curves to be added to comply with forging inspection requirements. C-scan view is also available for linear and sectorial scans. Inspection reports can be generated in an HTML format for viewing in internet browser.

Olympus TomoView is a powerful and versatile software package that manages the acquisition of UT (ultrasonic testing) signals combined with the real-time imaging of these signals, as well as offline analysis of previously acquired data files. The new TomoView 2.9 version offers many advanced functions and features that are needed to efficiently acquire and analyze data during UT inspections. Inspectors will now be able to get quickly up-to-speed with a new Intuitive User Interface that uses identical nomenclature, data representation and reports as the Olympus OmniScan® MX multitechnology flaw detector. Inspection reports can be generated in an HTML format for fast and easy viewing in an internet browser. DGS curves can be added to comply with forging inspection requirements. New features have been included to give the user the ability to move detection gates in Analysis (off-line) mode. A new C-scan view for both linear and sectorial scans (S-scans) has also been added.

TomoView 2.9 is an ideal tool for either on-site or laboratory work. It runs under Microsoft® Windows® XP, Vista and Windows 7 (32 bits). Adaptable to any hardware configuration, TomoView can run efficiently on standard laptop computers and on high-end desktop workstations. It is a complete software application capable of easily handling very large data files, depending on the configuration of the computer. Furthermore, TomoView offers great flexibility and a graphic interface that makes it very easy to use.