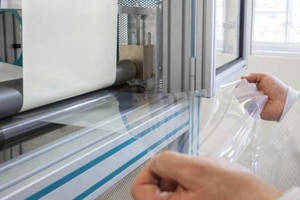 Available as roll stock, ELASTOSILÂ® Film is made, in cleanroom conditions and without use of solvents, entirely from silicone elastomers and comes in thicknesses down to 20 microns. Intermediate backing allows film to be peeled off intact, and film thickness across entire width and length of film web deviates from specification by Â±5% at most. Film is permeable to water vapor and certain gases, such as oxygen, nitrogen, and carbon dioxide but not to water.


Munich – WACKER, the Munich-based chemical group, will be introducing a world first at the 19th International Trade Fair for Plastics and Rubber K 2013 in Düsseldorf, Germany: ultrapure precision silicone films. The film is available as roll stock in thicknesses down to 20 microns. Marketed as ELASTOSIL® Film, this innovative product broadens the application potential of silicones, making new product ideas possible, such as functional membranes, adhesive plasters and sensors, not to mention groundbreaking technologies based on electroactive polymers such as actuators and generators. K 2013 will take place in Düsseldorf from October 16 to 23.

ELASTOSIL® Film sees WACKER marketing a product that has not yet been made commercially available in this form: precision silicone films. Made entirely from silicone elastomers, these films are available in thicknesses down to 20 microns. They are manufactured in cleanroom conditions without the use of solvents. For improved handling, ELASTOSIL® Film comes with an intermediate backing from which they can easily be peeled off intact.

WACKER’s patent-registered production process provides immaculate and extremely uniform silicone films with a defined thickness. The film thickness across the entire width and length of the film web deviates from the specification by ±5 percent at most. This particular property, together with the material’s typical silicone characteristics, permits technical applications that were previously very hard or even impossible to implement on an industrial scale.

ELASTOSIL® Film is suitable as a gas-permeable packaging and protective film, as a membrane for separating or enriching gases or for producing particularly soft and flexible adhesive plasters. In this regard, silicone films exhibit a beneficial property typical of silicone elastomers: the film is permeable to water vapor and certain gases such as oxygen, nitrogen and carbon dioxide, but not to water.

Because silicone elastomers are electrically insulating, have good dielectric properties, and endure long-term mechanical loads with hardly any signs of fatigue, ELASTOSIL® Film can also be used, for example, as an electroactive polymer (EAP). Under certain conditions, EAPs are able to alter their shape when a voltage is applied. As a result, silicon films can be used to design innovative sensors, actuators and generators. Potential applications range from toys, electrical relays and electrically operated valves to artificial limbs and peristaltic pumps.

Forming part of artificial muscles in actuators, silicone films can replicate not only linear movements, for example, but also natural forms of movement. What’s more, silicone films may in the future play a pivotal role in the conversion of maritime wave power into electricity. As part of a project sponsored by the German Federal Ministry of Education and Research (BMBF), a consortium of industrial and R&D partners led by Robert Bosch GmbH is developing the basic principles underlying future wave farms. WACKER is the project member responsible for developing silicone films and the related production process.

ELASTOSIL® Film provides the key to the commercialization of trailblazing innovations and technologies. The films can be manufactured in large quantities and ensure precise functioning. Thanks to their durability, they also make sure that critical components enjoy almost maintenance-free operating.