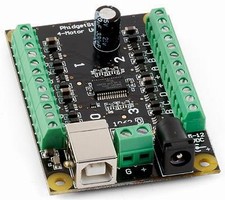 Phidgets Adds a $75.00 Stepper Controller to Its Line of Motor Controllers


The 1062 - PhidgetStepper Unipolar 4-motor, can control up to 4 stepper motors.

CALGARY, Alberta, April 29, 2008 ¯ Phidgets Inc. today announced the addition of a new product to its family of motor controllers. The 1062 Stepper controller controls the position, velocity and acceleration of up to 4 unipolar stepper motors. Applications that require precise positioning are well suited for this device. The stepper controller can also run the motor in continuous rotation mode by giving it a large position address. Using the upper position limit as an address would, for example, rotate the motor for 45 years.

The 1062 plugs directly into the computer's USB port and comes with a USB cable. Like all Phidgets, application programs can be written using the Phidgets API. "The 1062 Product Manual's Technical Section contains valuable information and programming tips on how to use the API functions to drive stepper motors," said Bernard Rousseau, Phidgets Director of Marketing. "We continuously update our documentation in an effort to make it as easy as possible for our users to get their projects going", added Rousseau.

"We already offer Servo controllers, and a variety of DC motor controllers. The arrival of a stepper controller fills a void in our family of motor controllers. " says Chester Fitchett, CEO of Phidgets. "We have paid close attention to costs in order to give our customers the value/price ratio they are expecting from Phidgets." added Fitchett.

Pricing and Availability
The 1062 - PhidgetsStepper Unipolar 4-motor is available now. The suggested resale price is $75.00 Canadian.

About Phidgets
Phidgets, Inc. is a technology leader in the design and manufacture of low-cost control and sensing modules connected to personal computers through the USB port. Phidgets products are ideally suited for fast prototyping and light, non-critical commercial applications. The privately held company is based in Calgary, Alberta, Canada.