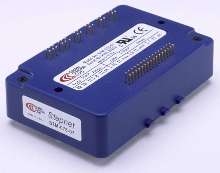 StepNet(TM) modules function as stand-alone step motors drives, in addition to their networking role. When used with a dedicated motion controller, the drives accept CW/CCW and pulse & direction inputs, plus quadrature encoder data for electronic gearing.

StepNet(TM) drives deliver 5A continuous and 7A peak current and operate from 20 to 75VDC. In multi axis motion controls, the ability to operate all stepper drives and servo amplifiers from a common 75VDC supply cuts cost and reduces space.