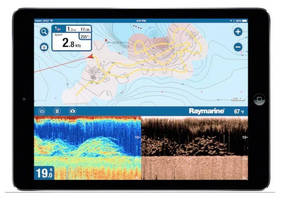 Wareham, Mass. – Navionics, the leader in content and location-based services for the recreational boating and outdoor markets, announced today the latest details of its award-winning SonarChart™ Live. Now offering compatibility with Raymarine Dragonfly PRO and Wi-Fish™ systems, boaters can connect GPS chartplotters, sounders and fishfinders with their mobile devices using Wi-Fi to view an HD bathymetry map in real time while navigating. Raymarine Dragonfly PRO and Wi-Fish™ users can also take advantage of the unique split-screen view within the Navionics Boating app, enabling them to display both charts and DownVision™ sonar in the palm of their hands.

SonarChart™ Live is also now available for use with any sounder or plotter connected to a compatible Wi-Fi router, such as Digital Yacht’s Sonar Server. Once a device is connected via Wi-Fi to Navionics Boating, sonar data is streamed to the app to instantly create and display a personal SonarChart™ Live map layer on top of existing charts. Boaters simply engage the GPS and watch as the new HD detailed bathymetry chart reveals the shape of the sea floor with detailed bottom contours in real time as the boat moves across the water. These up-to-the-minute details are saved and stored on the mobile device for continued private use and can be edited and refined over time.

“What’s most exciting about SonarChart™ Live is that any boater can create and enjoy better charts with very little effort or expenditure,” said Don Black, senior vice president of global sales and marketing, Navionics. “There is something powerful and exciting about watching charts develop and improve right before your eyes.”

While SonarChart™ Live is the result of a single user’s input and stored directly on their device, the depth information collected by all users generates a stream of private data shared with Navionics to improve SonarChart™ for all boaters. SonarChart™ Live is an excellent way to monitor in real time the improvements a survey will bring to Navionics SonarChart™. All user-contributed data is processed with existing data from proprietary surveys as well as a variety of public and private sources to ensure more and more precise charts every day. A valuable component of Navionics chart cards used in most plotters, SonarChart™ is also offered in Navionics Boating mobile apps and on the Navionics free WebApp.

Currently, the following Wi-Fi devices are compatible with SonarChart™ Live:

These newly compatible devices can each connect to the Navionics Boating app using their built-in wireless capability. Both provide CHIRP DownVision™ to the app’s unique split-screen view, while the Dragonfly PRO also displays a conventional sonar fishfinder view.

This dedicated wireless sounder displays a fishfinder in split-screen with Navionics charts in the Navionics Boating app. Fishfinder settings can be adjusted within the app for optimal sensitivity under various conditions.

This NMEA 0183 Wi-Fi router allows boaters to stream depth data from their compatible Lowrance, Simrad or B&G chartplotter/sounder to the Navionics Boating app.

This NMEA 0183 Wi-Fi router allows boaters to stream depth data from a wide range of compatible chartplotters/sounders to the Navionics Boating app.

For 30 years, Navionics® has developed and manufactured electronic navigation charts and systems for marine, inland lakes and rivers, and outdoors use. Navionics, based in Viareggio, Italy, operates its US headquarters in Wareham, MA, and worldwide offices in the UK, India, Australia, Estonia and Russia.
Share