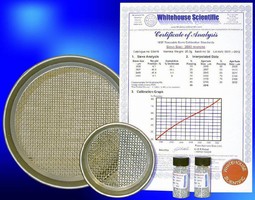 Used to calibrate mesh sizes from 20-3,350 microns, single dose standards for 100 and 40 mm test sieves are accurate down to 1 micron. Microsphere method measures at least 80% of surface and produces one unambiguous result: equivalent spherical aperture. This is cut point of sieve and facilitates sieve matching. Test takes minutes to perform, and sieves do not need to be returned to manufacturer. All measurements are traceable to NIST.


Following the success of its precision glass microspheres for calibrating 200 mm diameter sieves, Whitehouse Scientific is to introduce a new set of single dose standards for 100 mm and 40 mm test sieves. The standards will be launched at ACHEMA 2006 (15-19 May 2006; Munich).

The new standards can be used to calibrate mesh sizes from 20 to 3350 microns and are accurate down to 1 micron. Unlike the ISO microscopic method of calibration (which requires 10 different parameters to specify a sieve mesh and analyses less than 1% of the sieve surface), the microsphere method measures at least 80% of the surface and produces one unambiguous result, the equivalent spherical aperture. This is effectively the cut point of the sieve and makes sieve matching very easy.

The test takes minutes to perform and sieves need not be returned to the manufacturer. All measurements are traceable to NIST. www.whitehousescientific.com

Whitehouse Scientific has been producing precision glass microspheres for calibration for 20 years and is the highest ranking European certification laboratory for primary methods of particle size analysis. Having filled over one million bottles using a unique 100 stage spinning riffler system, the company is now the world's leading manufacturer of single-shot glass microsphere standards.