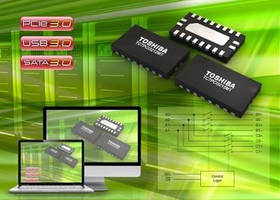 The TC7PCI3212MT and TC7PCI3215MT join the previously announced TC7PCI3412MT and TC7PCI3415MT, which are also well suited for circuit design engineers working with third generation PCIe or other high-speed interface applications (including USB 3.0 and SATA 3.0).

The wide bandwidth characteristics achieved by the new bus switches make high-speed transmission with lower signal degradation possible. Wide bandwidth also minimizes the attenuation of signal amplitude by inserting a switch, and can pass through GHz high-speed differential signals. The TC7PCI3212MT and TC7PCI3215MT have optimal configurations for arrangements of PCIe slots, connectors and switches on the motherboards of servers, desktop PCs, notebook PCs and PC peripheral devices.