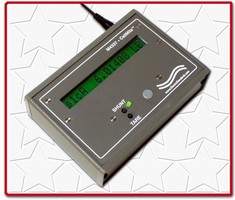 Electro Standards has just introduced the CellMite(TM) Model 4337 Digital Signal Conditioner with a 16-character auto identifying display. This CellMite(TM) connects directly to a standard strain gage transducer and simultaneously generates a serial output for direct connection to a PC and a scalable ±10V analog output for interface to data acquisition systems.

The CellMite(TM) has storage for three calibrated sensors, each with integrated 6-point calibration and independent user-specified display setup parameters. When a TEDS-Tag(TM) capable sensor is connected to the unit, that sensor is immediately identified by the CellMite and its stored calibration data and display configuration are automatically loaded. If that sensor is removed and another TEDS-Tag(TM) sensor is connected, then its calibration data and display data are automatically loaded. Auto sensor identification and auto display identification require no user intervention and prevent field personnel from making costly errors due to incorrect sensor calibration or display setup.

The CellMite(TM) can be operated with a computer or setup by a computer and then used as a stand-alone unit. CellMite(TM) and optional CellView Graphical User Interface software create a turnkey data acquisition system that generates Excel data files. The software also supports multiple units in a serial data network configuration and mix and match operation with other CellMite models.