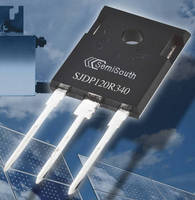 Rated at 1200V with a maximum on-state resistance of 340 mW (typical RDS,on of 270 mW), these new devices feature a positive temperature coefficient for ease of paralleling and extremely fast switching with no tail current at 150 °C. Key applications include photovoltaic microinverters, SMPS and UPS, motor drives, and induction heating.

Explains SemiSouth's Director of Sales, Dieter Liesabeths: "Because of the small die size and our compact device design, the new SJDP120R340 normally on SiC trench JFETs are very cost-effective. Samples are available today; with volume production set to begin in Q2 2012 with pricing below $7 in quantities of 1000."

About SemiSouth Laboratories, Inc.
SemiSouth, a privately owned corporation with its main offices and foundry in Starkville, Mississippi, (USA), focuses on silicon carbide (SiC) power devices and electronics, targeting applications such as: solar inverters; power conversion in computing and network power supplies; variable-speed drives for industrial motors and hybrid electric vehicles; and products used in high-power, harsh-environment military and aerospace environments. The company was formed in 2000, has sold products globally through direct sales or distributors since 2005, and received a major growth investment from Power Integrations (NASDAQ: POWI) in 2010. It introduced the world's first commercial, cost-effective normally-off SiC JFETs in 2008, which have enabled world-record energy efficiencies for its customer's products. More information is available at www.semisouth.com.