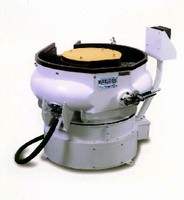 ALBERT LEA, Minnesota (July 3, 2007) - Three models in a new line of economical round-bowl finishing machines with fewer automated features while delivering the same maximum performance, reliability and efficiency, are now available from ALMCO, Inc.
The company's new VibeMaster Series includes the VM-3, VM-5 and VM-10 models, with tub capacities of 3, 5.3 and 10.6 cubic feet, respectively. The key difference between these machines and those in ALMCO's standard OR Series is manual versus automatic separation of metal parts and abrasive media at the conclusion of the deburring process.

Presented as an economical alternative to other machines from ALMCO and other manufacturers, the new line is designed "for smaller, non-high-volume, non-automated shops where non-automatic, manual operating parts/media separation is acceptable," according to Larry Beavens, national sales director. Currently in stock at company headquarters, ready for immediate shipment, all three models are "tremendously price-competitive," he notes.

For further information about the VibeMaster Series, contact ALMCO, Inc., 507 West Front Street, Albert Lea, Minnesota 56007, phone 1-800-521-2740, or visit the company on the Internet at www.almcoinc.com. ALMCO is the world's largest manufacturer and an international marketer of standard and custom-designed equipment for metal parts deburring and finishing.
Share