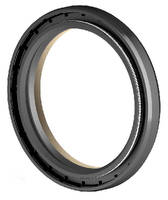 Featuring 2 sealing lips, Simmerring Central Tire Inflation Seal is designed for pressures up to 8 bar and circumferential speeds up to 10 m/s. Primary seal lip is made of wear-proof, glass-fiber-reinforced PTFE that handles sealing against air, reducing pressure on second seal lip, which is made of fluorocarbon rubber or nitrile rubber with Shore hardness of A 72. Connection between PTFE seal lip and FKM or NBR oil seal is executed with state-of-the-art adhesive technology.


The two-component solution – leak-proof against air and oil

PLYMOUTH, Mich.,  – In agricultural and construction machinery, tire pressure must be adapted to the soil conditions to optimally transmit the engine’s power to the ground, especially on difficult terrain. As a result, the operator driving the equipment must individually regulate the pressure. With the help of a tire pressure control system, this adjustment not only makes possible improved traction, it also reduces tire wear and the downtime due to pressure loss and tire breakdowns, which leads to lower operating costs.

Traditionally, the sole weak point of tire pressure control systems has been their standard radial shaft seal rings made of polytetrafluoroethylene (PTFE). The seal rings need to be leak-proof against oil or grease on one side, and against air on the other, but have not performed satisfactorily until now. Oil leaks at high air pressure have been a typical problem and incidents where the entire seal lifts up, causing oil to leak out, have been common.

Now, the new Simmerring Central Tire Inflation (CTI) seal from Freudenberg-NOK Sealing Technologies stands out for its extremely high reliability. This patented development with two sealing lips is a two-component solution. The primary seal lip system is made of highly wear-proof, glass-fiber reinforced PTFE that handles sealing against air, reducing the pressure on the second seal lip, which is made of fluorocarbon rubber (FKM) or nitrile rubber (NBR) with a Shore hardness of A 72 and is extremely pressure-resistant.

The new Simmerring CTI can take over the task of previous standard oil seals. The connection between the PTFE seal lip and the FKM or NBR oil seal is executed with state-of-the-art adhesive technology. The seal is designed for pressures up to 8 bar and circumferential speeds up to 10 m/s (not in combination). It offers greater reliability and less air leakage than previous radial shaft seal rings.