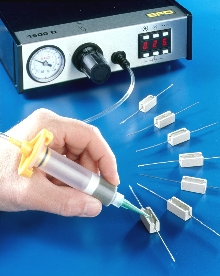 The 1500D is a tabletop unit that operates on compressed air and electricity and uses microprocessor circuitry to fill every cavity with an identical amount of material. It dramatically increases worker productivity by allowing components to be potted in a single step, without the need to "top off' or trim away excess material. Filling components from the bottom up also eliminates the bubbles and voids encountered with traditional potting methods.

Potting material is loaded into a disposable syringe reservoir, which is then connected to the dispenser console by a lightweight air line. The user holds the syringe like a pen, inserts the tip into the lower part of the cavity, and uses the dispenser's "teach" function to set the volume of the fill. To repeat, the user simply places the tip inside the next cavity and taps an electric foot pedal.