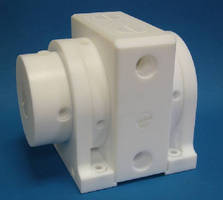 Featuring W-shaped base frame, FUTUR-Omega Series is constructed entirely of PTFE and machined from solid blocks. Self-priming AODD pumps are available in 3 sizes with max capacities of 5.3, 13, and 26 gpm. Units have few moving parts and can run dry. Pumped liquid flows straight through center housing, while air control system and air chambers are located on side housing, ensuring only one part of housing comes in contact with liquid.

Kamp-Lintfort, Germany- Almatec®, a premier manufacturer of specialized air-operated double-diaphragm (AODD) pumps, is pleased to announce the addition of the FUTUR-Omega Series to its growing line of standard-setting pneumatic diaphragm pumps. Specially designed for high-end semiconductor applications, the new FUTUR-Omega Series features a compact, simple design with only a few moving parts to provide a long lifecycle and improved safety.

Featuring a new W-shaped (Omega-shaped) base frame, the FUTUR-Omega Series is machined from and constructed entirely of PTFE material. The new FUTUR-Omega is a self-priming AODD pump, which can run dry. Its designed so that the pumped liquid flows straight through the product of the center housing, while the air control system and air chambers are located on the side housing. This design ensures that only one part of the housing comes in contact with the liquid, therefore reducing the number of flow bends to only two, and maximizing surface area. The contact-less cascade between the product chambers excludes the problem of sliding surfaces in the liquid with respect to particle generation and dry running sensitivity.

In addition, the FUTUR-Omega Series was recently named a 2011 Innovation Award winner by United States-based Flow Control magazine. The 2011 Flow Control Innovation Awards honor the year's most compelling fluid handling technologies in the industry. Almatec's FUTUR-Omega Series was nominated for its novel technology solutions in the Control category.