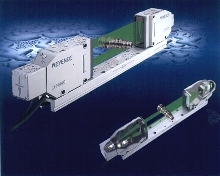 The new LS-7000 sensor does not use a motor or rotating prism mechanism as do conventional laser scanning micrometers. Instead, a high intensity LED light source and a HL-CCD (High Speed Linear CCD) are employed to provide a significant increase in measurement speed and accuracy. The sampling rate of the LS-7000, 2400 samples/sec, is 2X that of conventional systems with a resolution of 0.01 microns. Repeatability is - 0.15 microns, 2X that of conventional scanning micrometers.

The LS-7000 sensor has no moving parts and, therefore, generates no heat or vibration - and it is maintenance free. It is a very precise and reliable tool for performing high-speed measurements on moving targets on fast production and assembly lines.

The LS-7000 uses a high intensity, low noise GaN (Gallium Nitride) LED light source. The green 520 nm (nominal) short wavelength of the GaN LED light more closely matches the operating characteristics of the CCD receiver element than previously used GaP laser diodes. Additional performance enhancing features include a newly designed telecentric optical system that uses only parallel light to form an image, thus preventing fluctuations in lens magnification due to changes in target position. The LS-7000 s 30-mm (1.2 ) wide beam is continuous, which means there are no gaps in target detection since there is no scanning involved.

A CMOS camera mounted in the receiver head provides an image of the target on the Target Viewer section of the controller monitor. This enables users to quickly and accurately position the target in the beam for precise measurement. The LS-7000 is IP-64 rated for operation in harsh, wet environments. The unit incorporates an abnormal value elimination function for increased measurement accuracy and a transparent object measurement function for measurement of transparent targets.