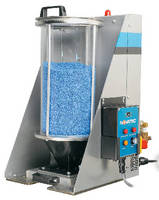 Specifically designed for processing small quantities of material up to 5 lb/hr, Model NDM-5 utilizes compressed air and proprietary membrane, instead of dusty desiccant beads, to draw moisture out of polymers. Materials can be changed by removing integral glass hopper and replacing it with spare hopper containing another material. To operate, user turns dryer on and sets temperature on microprocessor control, which is equipped with 12 ft long pendant for remote mounting.


Baltimore, MD USA - NOVATEC, Inc. introduced their NDM-5 medical dryer at NPE 2012. This compact resin dryer is specifically designed for use by medical molders processing small quantities of material up to 5 lb./hr. It is based on the same basic principle as the non-desiccant NovaDrier(TM), which has been popular with medical molders since its introduction over 12 years ago.

Mark Haynie, Product Manager, Dryers for Novatec says, "Medical Molders like the fact that these dryers use compressed air and a proprietary membrane, instead of dusty desiccant beads, to draw moisture out of polymers. Any type of resin can be dried with this technology and now it is available in a compact package that can be machine-mounted. Materials can be changed by simply removing the integral glass hopper and replacing it with a spare hopper containing another material. "

The NDM-5, like its cousin, the NovaDrier has no moving parts so the only scheduled maintenance is to replace the compressed air filter elements every 12 months. Operation is so simple that you just turn the dryer on and set the temperature on the microprocessor control which is equipped with a 12' long pendant for remote mounting.

The NDM-5 can be equipped with the NOVATEC MoistureMaster(TM) in-line moisture analysis system for molders who are processing materials that cost thousands of dollars per pound or who are molding parts from materials that are highly sensitive to moisture content. This sensor monitors moisture in percent or ppm (parts per million) down to 100 ppm and displays the result on a color touch screen control so molders no longer have to guess about the actual resin moisture content.