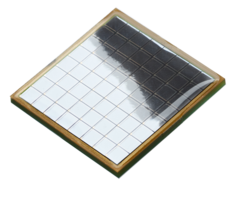 The Zecotek's Micro-Pixel Avalanche Photo Diodes and Transistors (MAPD/T) are offered with unique radiation hardness and display with high linearity. The units are designed for use in self-driving automobiles, agriculture and genomics industries.

VANCOUVER, British Columbia, October 1, 2018 /PRNewswire/ -- Zecotek Photonics Inc. ("Zecotek" or the "Company") (TSX-V: ZMS) (Frankfurt: W1I), a developer of leading-edge photonics technologies for healthcare, industrial and scientific markets, is pleased to announce that it has initiated the manufacturing of its new generation series of solid-state micro-pixel avalanche photo diodes and transistors (MAPD/T) at the Malaysian Institute of Microelectronics Systems.

A portion of the funds raised in the divisional equity financing announced in June 2018 have been allocated to the manufacturing of the new generation series of solid-state MAPD/T. The Company will move to full production and commercialization to meet the increasing demand for medical imaging, high-energy physics and other industrial applications including an expected increase in joint sale with the LFS scintillation crystal for advanced positron emission tomography (PET) medical scanners.

"We are very pleased to have the Malaysian Institute of Microelectronic Systems begin the production of our patented high dynamic range photo detectors," said Dr. A.F. Zerrouk, Chairman, President, and CEO of Zecotek Photonics Inc. "This is the first phase to the commercialization of the new generation series of solid-state MAPD/T before moving to full production and commercialization. We are experiencing increased demand from medical imaging, high energy physics and other industrial sectors for applications such as LIDAR for electric and self driven vehicles, due to the significant performance advantages of our MAPD/T."

Also reported, as part of the recently announced strategic review undertaken by the board of directors and senior management of the Company, each subsidiary of the Company has been tasked to enhance their intellectual property portfolio to target those markets with immediate needs in fast growing industries. This review has identified new and exciting applications for the solid-state MAPD/T in emerging industries such as self-driving automobiles, agriculture and genomics.

In agriculture, quality control of micro-active elements is key to maintaining the level of potency and nutritional content as advertised and advised for consumption. Zecotek's high-resolution MAPT photosensors combined with other proprietary photonic technologies can play a central role in measurement devices that define and measure the efficacy of extraction of useful elements from various plants, vegetables and fruits.

The interdisciplinary field of science focusing on the structure, function, evolution, mapping, and editing of genomes, has been identified by Zecotek Imaging System as an opportune and ready market. Genomics evolved from a series of experimental and conceptual advances that allowed researchers to decipher the DNA sequences of whole genomes from virtually any organism and Zecotek's MAPD/T are components that can play a significant role in this important field.

About Malaysian Institute of Microelectronic Systems

MIMOS is Malaysia's premier Applied Research and Development Centre in Information and Communications Technology, Industrial Electronics Technology and Nano-Semiconductor Technology. As a strategic agency under the Ministry of Science, Technology and Innovation (MOSTI), MIMOS contributes to raising Malaysia'scompetitiveness by pioneering market creation for Malaysian technopreneurs through patentable technology platforms, products and solutions. Over the past 12 years, MIMOS has filed more than 2,000 Intellectual Properties in various technology domains and across key socio-economic areas. Serving a central role in Malaysia'stransformation journey and ICT Vision, MIMOS endeavors to create a culture of innovation by nurturing relationships with internal and external stakeholders, in the spirit of smart partnerships and inclusive growth models and strategies.