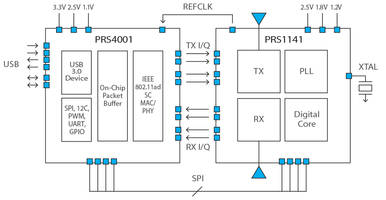 The Wireless Video Products are offered with MA-USB protocol (wireless docking solution). The WiGig wireless technology is suitable for video conferencing applications where near real-time response between participant is required. The WiGig is used in wireless displays and productivity applications in which near-zero latency is needed. This 60 GHz WiGig technology offers latency levels in the range of 5 ms for gaming and VR applications.

Peraso is the only WiGig vendor in the market that supports the MA-USB protocol, thus allowing its customers to develop high performance, low-latency solutions for the wireless video market.

"Multi-gigabit data rates, low latency and low interference are critical advantages that make 60 GHz technology an ideal choice for Millitronic," explains Alex Lin, President and CEO of Millitronic. "Further, our strong relationship with Peraso has enabled Millitronic to be an early vendor of WiGig-based solutions in the wireless networking marketplace."

The low latency aspect of WiGig wireless technology is essential for a variety of video use cases, including video conferencing, which requires near real-time response between participants. Further, WiGig is ideal for use in wireless displays, as productivity applications such as spreadsheets require near-zero latency in terms of the user interaction. Ultimately, gaming and VR require latency levels in the range of 5ms, only achievable with 60GHz WiGig technology.

"We are seeing a surge in demand for wireless video support, particularly with the simultaneous broad transition to 4K video," said Bill McLean, President and CEO of Peraso Technologies. "As the only WiGig vendor to support point-to-multi-point MA-USB, Peraso is the go-to choice for this application."

Peraso will be showcasing their wireless video, networking and fixed wireless solutions at CES 2019 - January 8th - 11th, 2019, at the Westgate Hotel. To arrange a private demonstration, email CES-booking@perasotech.com.

About Peraso Technologies, Inc.
Peraso is a fabless semiconductor company headquartered in Toronto, Canada. The company is focused on the development of 60 GHz chipsets and solutions compliant with the IEEE 802.11ad specification. 60 GHz has been adopted for interoperability certification by the WiFi Alliance under the WiGig® brand. For more information, visit www.perasotech.com.