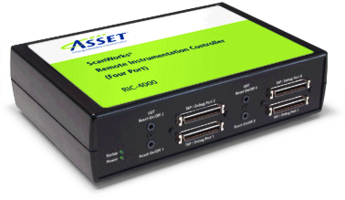 Richardson, TX (Aug. 8,2019) – Because of its expanded internal memory, a new Ethernet controller for ASSET® InterTech’s ScanWorks® platform can program larger data images and process test operations faster. The new Remote Instrumentation Controller, designated the RIC-1400, is a direct replacement for the RIC-1000 and features a faster test clock and internal memory that has been expanded 16-fold. ASSET is a leading supplier of software and hardware debug, validation and test tools.

“With the RIC-1400, as with our other RIC controllers, ScanWorks users are able to run boundary-scan tests and program devices on the Unit Under Test (UUT) via an Ethernet connection,” said Michael Johnson, Product Manager for ScanWorks Boundary-Scan Test. “Of course, if the RIC controller is connected to an organization’s Internet, an engineer with ScanWorks running on his or her personal computer and access to the organization’s Internet can conduct boundary-scan test and programming of a UUT from any location in the world.”

Alternatively, to avoid network delays which could increase test and programming times, the RIC-1400 can connect directly to a UUT and a computer running ScanWorks via the computer’s Ethernet port in a peer-to-peer fashion. With the upcoming release of ScanWorks 4.7, users will also be able to configure the RIC-1400 as a USB 3.0 controller and conduct boundary-scan test and programming of a UUT directly from a PC’s USB port.

ASSET InterTech (www.asset-intertech.com) is a leading supplier of tools to debug, validate and test software and hardware. The company’s SourcePoint tools for software debug and trace, and its ScanWorks® fast test and programming platform give engineers real insight from code to silicon. Together they empower developers with tools and technology for the entire life cycle of a system, beginning with software and hardware development, continuing through design validation and software/hardware integration, and eventually supporting the testing of the product in manufacturing and field service. ASSET InterTech is located at 2201 North Central Expressway, Suite 105, Richardson, TX 75080.

Our blog – Test Data Out: http://blog.asset-intertech.com/