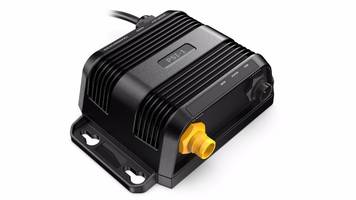 With the PSI-1 and a LiveSight transducer installed on an HDS Carbon system, anglers will enjoy the capability to track lure and fish movements in real time with wider coverage and at greater range with LiveSight Sonar. Perfect for drop-shotting, vertical-jigging or lure-tracking in front of the boat, LiveSight Sonar helps anglers pinpoint fish locations, and know whether they are actively feeding.

When mounted on a trolling motor looking forward, LiveSight Sonar, anglers cast a lure into the sonar beam and track the lure’s presentation, as well as fish movement – turning every cast into a sight-fishing experience.

When mounted downward-facing on the trolling motor or transom, LiveSight Sonar provides anglers with a real-time as well as a traditional sonar view. The combination of Lowrance’s trusted traditional sonar and the new innovative LiveSight Sonar images showing target and lure movement provides the ideal view when targeting fish swimming around structure beneath the boat.

Adding the PSI-1 and LiveSight Sonar transducer to an HDS Carbon network with Active Imaging™ transforms a boat’s network into a complete fishing system with trusted Lowrance CHIRP sonar, industry-leading DownScan and SideScan imaging and now real-time sonar views for whatever the fishing situation requires.

“We are pleased to bring the benefits of LiveSight Sonar to HDS Carbon users around the world,” said Knut Frostad, CEO, Navico. “The launch of the PSI-1 Performance Sonar Interface offers proof of our commitment to the long-term support of our customers.”

In conjunction with the release of the new module, Lowrance has released its new 19.1 software update for HDS LIVE and HDS Carbon. The free software (available now at https://downloads.lowrance.com/) is required for the PSI-1 to connect with HDS LIVE. The update also greatly increases refresh speeds and improves noise rejection and target sensitivity.

The PSI-1 is priced at $299 and is scheduled to start shipping in early September. For more information on the PSI-1 Performance Sonar Interface, LiveSight Sonar or the entire Lowrance line of marine electronics or to locate an authorized Lowrance dealer, please visit www.lowrance.com.