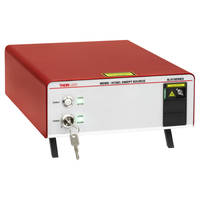 Newton, NJ – November 7, 2019 – Thorlabs announced today that it has released next-generation versions of its MEMSVCSEL Swept-Wavelength Laser Sources. The new SL10 series, centered at 1060 nm, complements the already wellestablished SL13 series at 1300 nm and is available with four different sweep rates ranging from 60 kHz to 400 kHz. Based on a patented microelectromechanical system (MEMS) tunable vertical cavity surface emitting laser (VCSEL), these light sources feature a record-breaking coherence length of over 100 mm and include an active power control that maintains constant output power over the lifetime of the laser.

All drive electronics and trigger signals needed to seamlessly integrate these sources into custom swept-source OCT systems are provided. An output digital “k-clock” signal, generated by the integrated Mach-Zehnder interferometer (MZI), and drive electronics can be used as a data acquisition sampling clock, with no further resampling in k-space required. The k-clock signal delay and maximum output power of the laser can be user adjusted up to ±8 ns and ±5%, respectively. All lasers are also available with an integrated matched balanced photodetector.

“Thorlabs’ MEMS-VCSEL lasers are well-suited for a vast variety of applications in metrology, sensing, spectroscopy, and imaging. For example, in optical coherence tomography (OCT), the new SL10 series enables previously unattainable imaging speed and sensitivity of both the anterior and posterior part of the eye,” said Alexandra Eggemann, Project Manager for Thorlabs’ OCT Imaging Systems and Swept-Wavelength Laser Sources. “The Thorlabs OCT and MEMS-VCSEL sales and application team would be pleased to discuss the best components for your imaging or metrology application.”

Thorlabs, a vertically integrated photonics products manufacturer, was founded in 1989 to serve the laser and electro-optics research market. As that market has spawned a multitude of technical innovations, Thorlabs has extended its core competencies in an effort to play an ever increasing role serving the Photonics Industry at the research end, as well as the industrial, life science, medical, and defense segments. The organization’s highly integrated and diverse manufacturing assets include semiconductor fabrication of laser diodes, optical amplifiers, lithium niobate modulators, quantum cascade/interband cascade lasers, and VCSEL lasers; fiber towers for drawing both silica and fluoride glass optical; MBE/MOCVD epitaxial wafer growth reactors; extensive glass and metal fabrication facilities; advanced thin film deposition capabilities; and optomechanical and optoelectronic shops.