Better to be Safe

Assembly pins are certainly not a new invention, but JW Winco has once again been able to enhance fully developed parts according to the application and combine them with other standard securing parts.

Assembly pins are unspectacular, but essential construction elements. Winco has taken this universal standard part and further improved it.

Stainless steel assembly pins from the GN 2342 series are available in all common diameters from 8 to 20 millimeters and in various standardized lengths. Three different end washer forms and the selection by means of a specific code number between assembly pin with and without transverse spring cotter pin holes diversify the series even further.

On one of the end washers is a simple, turned stainless steel collar washer which holds the axially inserted assembly pin in the correct position in the hole.

The eyelet washer version, having a hole in which a retaining cable or a ball chain can be attached, protects the assembly pin from getting lost, as well as the matching spring cotter pin, which secures the assembly pin axially through the transverse hole.

The third type of washer offers a fastening tab with an elongated hole. This simultaneously secures the assembly pin axially, which restricts rotation and is attached without play using a countersunk screw.

All washers are non-detachable because they are fastened to the assembly pin via their axial countersunk hole. This design favors the implementation of solution-specific special lengths that are available upon request in comparatively low quantities.

Both GN 2344 series washers with protection against loss can also be ordered separately for individual applications, for example, for additional retaining cables or for specific assembly pins.

Because Winco keeps focus on the big picture, we revised the spring cotter pin as well. The securing element, which is available as GN 1024, is based—unlike the DIN standard—on even-numbered wire gauges, which simplifies matching to the associated through hole. The spring cotter pins are available in steel and stainless steel, as well as with single or double winding. With the latter form, the flat spring characteristic curve facilitates easy fitting.

More information can be found at www.jwwinco.com. 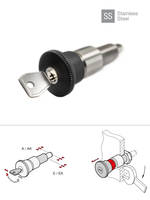 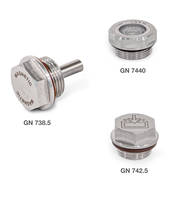