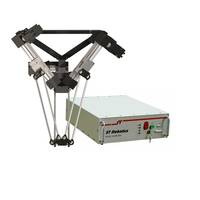 At a cost substantially lower than other major manufacturers, the ST R18 Delta industrial robot turnkey system is based on the Igus drylin® delta robot but powered by ST's K11R robot controller resulting in much higher speeds with the ability to complete a standard 12-inch cycle in only 500 milliseconds. ST's RoboForth software is easy to program and integrates robot motion to allow, for example, moving objects to be picked without stopping.

"We initially developed our new Delta Robot based on a request for high-speed picking and placing on recycling plant conveyors. We married Igus' solid and well-designed modules with our high speed stepper technology to produce a simple and phenomenally reliable Delta industrial robot system. Applications that require light and small objects to be manipulated for very short distances at very high speeds can greatly benefit from the R18 system," comments David Sands, Founder CEO at ST Robotics.

ST Robotics, widely known for 'robotics within reach', has offices in Princeton, New Jersey and Cambridge, England, as well as in Asia. One of the first manufacturers of bench-top robotic arms, ST Robotics has been providing the lowest-priced, easy-to-program boxed robots across industries for the past 30 years. ST's robots are utilized the world over by companies and institutions such as Lockheed-Martin, Motorola, Honeywell, MIT, NASA, HP, Sony, IBM and Astra Zeneca. The numerous applications for ST's robots benefit the manufacturing, nuclear, pharmaceutical, laboratory and semiconductor industries.