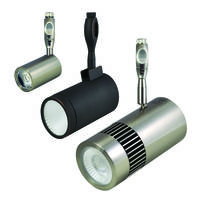 With sleek contemporary lines, Cyndi is offered in three sizes and can be attached anywhere along Nora’s 120V bendable Rail System.

The fixtures are constructed from die-cast aluminum with finishes in bronze or brushed nickel for a dramatic accent or general lighting statement in commercial and residential applications.

Nora Lighting’s award-winning line voltage Rail System offers the lamping dynamics of conventional track with the capabilities of longer line voltage runs –up to 2400 watts on a single line from a single power source. The system’s visual appeal is enhanced with a choice of configurations and a complete line of installation accessories.