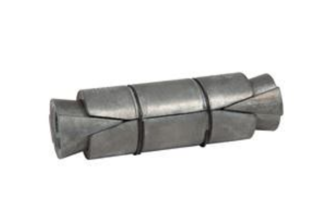 CONFAST Double Expansion Anchor features two cones, one with threading and other without threading. Unit is used for anchoring into concrete, brick or block base material. The anchor comes with two spring steel bands that allow expansion of the anchor against concrete at two points. Anchor is resistant to rust and is offered in diameter of ¼, 5/16, 3/8, ½, 5/8, and ¾ in. and hole diameters of ½, 5/8, 5/8, 7/8, 1 and 1-1/4 in. respectively.

Double expansion anchors are designed for anchoring into concrete, brick or block base material. The anchor body is made from a die cast alloy called Zamac, which is rust resistant and extremely durable. It has two expansion cones: one cone is threaded and the other is not. Two spring steel bands wrap the two halves together and allow the anchor to expand against the concrete at two points to allow for better holding values once installed.

Those searching for an anchor to be used in base material of questionable strength, requiring easy removability and a corrosion resistant body, can now purchase the double expansion anchor direct from the manufacturer at www.confast.com.