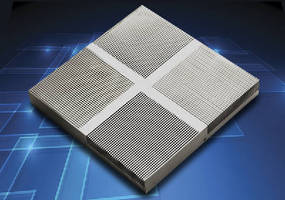 Based on Multiple Flow Entrance Technology™, QuadFLOW™ FansinksÂ useÂ directed airflow in multiple fin fields, cooling electronic components more effectively than liquid cooling methods. Fin fields are not parallel to each other, but instead are designed to allow airflow to enter from multiple directions. Airflows reach central core, where they are extracted by blower through multiple fin fields. Depending on configuration deployed, cooling performance is near or equal to 0.1Â°C/W.


Norwood, MA, – Advanced Thermal Solutions, Inc., ATS, has introduced the QuadFLOW™ fansink, which uses directed airflow in multiple fin fields to cool electronic components up to 30% more effectively than the liquid cooling methods currently deployed in 1 and 2U commercial servers.

Conventional heat sinks provide large amounts of cooling surface relative to their volumes. They work well in many applications where space is not an issue, including multi-U servers and workstations. But where space is highly constrained, cooling methods that rely on increased surface areas and airflow rate can’t adequately dissipate heat from high power electronic components. Examples are clouds, virtual routers, SDN and NFV distributed computing. To cool components at this level, engineers have used liquid-based systems that perform well, but are costly, bulky, heavy, and present many points of potential failure while exposing electronics to liquid.

The new, patented QuadFLOW fansinks are engineered for cooling high power electronic devices, such as CPUs and GPUs, using air as the coolant. They are designed to maximize extraction of heat from their integral heat sink fins. ATS uses its own Multiple Flow Entrance Technology™ to engineer several fin fields on the same heat sink base area. These fin fields are not parallel to each other, but instead are designed to allow airflow to enter from multiple directions. These airflows reach a central core, where they are extracted by a blower through the multiple fin fields. Fins can be straight, curved or shaped with features depending on thermal performance requirements. The patented QuadFLOW internal wall design prevents any coupling of airflows between adjacent fin fields.

Cooling performance from QuadFLOW fansinks is near or equal to 0.1oC/W depending on the configuration deployed. This level of thermal performance is attributed to the unique design of the fansink’s fin field and the plenum design that houses the blower while providing maximum airflow in each fin field chamber. Tests show that QuadFLOW fansinks provide a 25-30% improvement in heat transfer over the liquid cooling systems currently used on high performance CPUs in 1 and 2U servers.