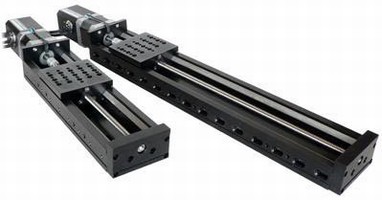 Featuring resolutions down to 0.25 Âµm, computer-controlled T-LSR series handles loads to 20 kg at speeds to 20 mm/s. Integrated motors and controllers allow stages to be daisy chained with all other T-series products and controlled from single USB or RS232 serial port. For non-computer based operation, knob at end of each unit permits smooth manual control. Multiple T-LSR stages may be mounted in x-y or x-y-z configurations without additional hardware.


Zaber Technologies (www.zaber.com) is proud to announce the launch of its T-LSR series of computer controlled motorized linear stages. These stages extend the range of Zaber's line of precision motion control products offering travel up to 300mm with resolution down to 0.25 um. Zaber's fastest and strongest stages, the T-LSR series can handle loads up to 20kg at speeds up to 20mm/s.

Multiple T-LSR stages may be mounted in x-y or x-y-z configurations without any additional hardware. They are also compatible with our T-LS series of precision motorized ball bearing stages which offer higher resolution over shorter travel.

Integrated motors and controllers allow T-LSR stages to be daisy chained with all other T-series products and controlled from a single USB or RS232 serial port. Demo control software for a variety of programming environments is available for free download from the Zaber website.

For more information on the T-LSR and compatible products please visit the links below:

About Zaber:
Zaber Technologies Inc. was founded in 1997 when precision motion control was typically accomplished with DC motors and encoders, requiring complicated, cumbersome and expensive controllers, amplifiers and power supplies. In 2000 Zaber introduced the first daisy-chainable miniature linear actuator based on stepper motor technology with integrated RS232 communications and control electronics in one small package. Since then Zaber has added over 120 products to its family of precision motion control and laboratory automation devices including linear actuators, linear slides, motorized x-y-z stages, rotation stages, motorized mirror mounts, and micro-stepping motor controllers. More information on Zaber is available at http://www.zaber.com/home/about.php.