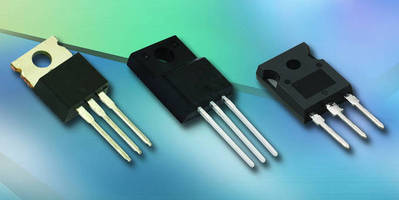 Built on second-generation Super Junction Technology, the new Vishay Siliconix SiHx25N50E 500 V MOSFETs provide a high-efficiency complement to Vishay's existing 500 V D Series components based on high-performance planar technology. The 25 A devices feature low on-resistance of 145 mΩ in a variety of package options, including the TO-220 (SiHP25N50E), TO-247AC (SiHG25N50E), and the thin leaded TO-220 FULLPAK (SiHA25N50E), which offers a low profile optimized for slim consumer products.

The RoHS-compliant devices are designed to withstand high energy pulses in the avalanche and commutation modes with guaranteed limits through 100 % UIS testing.