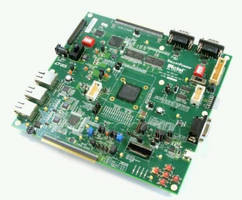 The A2F500-DEV-KIT is priced at $999 and available now for ordering. Customers may contact their local Actel sales office or distributor for more information. For evaluating SmartFusion FPGAs, an Evaluation Kit based on the A2F200 device is also available for $99 (A2F-EVAL-KIT).

SmartFusion, the industry's first intelligent mixed signal FPGA, is the only device that integrates an FPGA, hard ARM Cortex-M3-based microcontroller subsystem (MSS) and programmable analog, offering full customization, IP protection and ease-of-use. Based on Actel's flash technology, SmartFusion devices are intended for hardware and embedded designers who need a true system-on-chip (SoC) solution with more flexibility than traditional fixed-function microcontrollers and without the cost of soft processor cores on traditional FPGAs. SmartFusion is an innovative solution for the industrial, medical, energy, communications and military markets in diverse applications, including system management, power management, motor control, industrial networking and display.

Actel is the leader in low power FPGAs and mixed signal FPGAs, offering the most comprehensive portfolio of system and power management solutions. Power Matters. Learn more at www.actel.com.

Actel, Actel Fusion, IGLOO, Libero, Pigeon Point, ProASIC, SmartFusion and the associated logos are trademarks or registered trademarks of Actel Corporation. All other trademarks and service marks are the property of their respective owners.