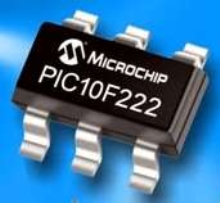 For space-constrained applications, PIC10F220 and PIC10F222 combine onboard 8-bit ADC with 8-bit Flash PICÂ® microcontroller in 6-pin SOT-23 package. Internal oscillator operates at up to 8 MHz with 33 instructions and 2 stack levels, while In Circuit Serial Programming(TM) enables programming after placement on board. Along with 1.125 ms Device Reset Timer, products feature 256-512 instructions of Flash program memory and 16-23 bytes of data RAM memory.

Microchip Technology Doubles the Performance of the World's Smallest Microcontroller

CHANDLER, Ariz., July 18, 2005 [NASDAQ: MCHP - Microchip Technology Inc., a leading provider of microcontroller and analog semiconductors, today announced two new members of the world's smallest PIC10F microcontroller family - combining the new option of an onboard 8-bit analog-to-digital converter (ADC) with an 8-bit, Flash PIC® microcontroller in a 6-pin SOT-23 package. This functionality in an ultra-small form factor is well suited for an extremely wide range of space-constrained and low-cost applications. The PIC10F remains the first and only 6-pin microcontroller family in the world, and the increased performance and analog-to-digital converter serve to further expand non-traditional applications for digital intelligence.

"Since its introduction a year ago, the PIC10F family has seen tremendous market acceptance among both traditional and non-traditional microcontroller users," said Steve Drehobl, vice president of Microchip's Security, Microcontroller and Technology Development Division. "The fact that engineers have a microcontroller with an analog-to-digital converter that is the size of a surface-mount transistor, executing 2 million instructions per second, further expands the creative uses for PIC microcontrollers."

Availability and Pricing
The PIC10F220 and PIC10F222 are offered in 6-pin SOT-23 packages. Limited sampling is available today, and volume production for both microcontrollers is expected by calendar Q4, 2005. In 10k quantities, the PIC10F220 is $0.65 each and the PIC10F222 is $0.74 each. For additional information, contact any Microchip sales representative or authorized worldwide distributor, or visit Microchip's Web site at www.microchip.com/startnow.