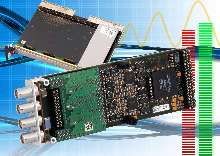 Model M78 is a 4-channel oscilloscope in 50 x 150 mm ANSI standard, M-Module form factor. It has 12 bits of resolution, bandwidth of 10 MHz, and sampling speed of 50 MS/s simultaneously on all 4 channels. Unit buffers converted values into 16 MB of on-board RAM, which is allocated in 4 MB blocks to each channel. Model M78 can be mounted on 3U or 6U carrier card and adds oscilloscope functionality to Compact PCI, PXI, and VME systems.

Dallas, September 22, 2003 - A new M-Module mezzanine card from MEN Micro, Inc., enables system designers to add multi-channel oscilloscope functionality to systems based on a wide variety of open buses, including Compact PCI, PXI and VME. Or, the new oscilloscope mezzanine card can also be easily installed in bus-less, standalone systems.

The M78, as the new mezzanine card is designated, is a complete four-channel oscilloscope in the 50 by 150 mm, ANSI standard, M-Module form factor. The M78 has 12-bits of resolution, a bandwidth of 10 MHz, and a sampling speed of 50 megasamples per second (MS/s) simultaneously on all four channels.

"The M78 is a great option for system designers who need oscilloscope functionality," said Ernest Godsey, president of MEN Micro, Inc. "Since it is an M-Module mezzanine card, the M78 can be mounted on a 3U or 6U carrier card and integrated into many different types of systems covering a large range of applications like simulators, analysis systems, high-speed data loggers, automotive diagnostic systems and many others."

The M78 buffers converted values into 16 megabytes (MB) of on-board random access memory (RAM), which is allocated in four MB blocks to each channel. Data is available after the sampling process and the contents of the M78's buffer can be transferred to the host.

To maintain a high degree of flexibility in the M78's capabilities, on-board input signal conditioning is implemented with the addition of a small printed circuit board. Various trigger functions, external triggers and clocking options make it possible for the M78 to be used as a fully featured digital oscilloscope in a modular multi-channel system.

Pricing and Availability
The M78 is available now from MEN Micro, Inc. Pricing starts at $1,095 for single units. In the United States, MEN Micro products are sold through a national network of technical manufacturer's representatives. For sales information, call 972 939-2675, send faxes to 972 939-0055 or email sales@menmicro.com. For more information on the M78, this press release, a product photo and collateral materials are available at men.de/products/press.

What's an M-Module?
The M-Module specification was originally developed by MEN Mikro Elektronik GmbH of Germany and has been widely accepted in the electronics industry. It is an ANSI (American National Standards Institute) standard (ANSI/VITA 12 - 1997). M-Modules are plug-in mezzanine cards approximately 50 by 150 mm in size. They can be inserted onto carrier cards to function in PCI, CompactPCI, PXI, VMEbus or essentially any other bus-based system, or they can be mounted directly onto a single board computer. MEN Micro offers a selection of more than 100 different M-Modules with a variety of configurations and capabilities. Other manufacturers also offer M-Modules and today there are more than 200 cards with a wide variety of capabilities and functionality are currently on the market.