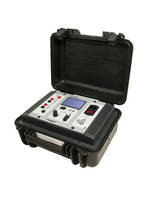 The MTO106 is used on smaller distribution and transmission transformers

Operating this new transformer ohmmeter is straightforward. Users make the ground connection, connect the power, and then make connections to the transformer under test using the supplied Kelvin leads. Once the required test current is selected, the user simply presses the start button. Test results are clearly shown on a large backlit display.

To ensure safe operation, both audible and visual indicators alert users that a test is being conducted. At the end of the test, the winding is automatically discharged with visual and audible indicators alerting of operation. Discharge continues until completion, even if the supply to the instrument is turned off.

The MTO106 has two test channels and manually selectable test currents in five steps up to a maximum of 6 A.  This allows the current to be chosen correctly for the transformer under test, while minimizing the risk of heating the windings. The ohmmeter delivers an open-circuit test voltage up to 48 V, ensuring that even large transformers are saturated rapidly, reducing the time needed for testing.

This new tester can detect problems like faulty tap changer contacts, broken conductors, shorted winding disks or layers, as well as poor bushing connections.  This versatile instrument can also be used to measure the winding resistance of other inductive assets, including generators and motors.

The MTO106 can be used to carry out winding resistance measurements in line with most major transformer testing standards, including those set by CIGRE, IEEE, IEC and ANSI.

Megger is one of the world’s leading manufacturers and suppliers of test and measurement equipment used within the electric power, building wiring and telecommunication industries.  With research, engineering and manufacturing facilities in the USA, UK, Sweden and Germany, combined with sales and technical support in most countries, Megger is uniquely placed to meet the needs of its customers worldwide.