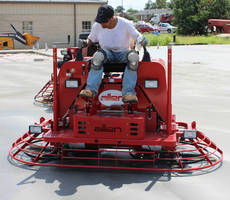 
The Allen MSP 470 is a totally new Hydraulic-Steering, Mechanical-Drive Riding Trowel in the Allen riding trowel line-up. The powerful diesel engine, patent-pending torque converter clutch system, super heavy-duty gearboxes and Spiders provides a great weight-to-horsepower performer for large and small contractors. This new workhorse features a raised operator platform and comfortable hydraulic joystick steering making this one of the most ergonomically designed riding trowels on the market. The MSP 470 is the latest addition to Allen’s Mechanical Super Pro (MSP) Series of Riders.