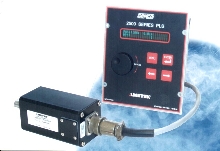 Gemco Series 2500 programmable limit switch controller has eight inputs and eight outputs and is expandable. It can be programmed to control 64 inputs and outputs at speeds of 100 msec. Applications include stamping presses, gluing lines, packaging machines, labelers, material handling, bottle and can manufacturing, and replacing cam boxes and older programmable limit switches. Programming is simple: Scroll through menu and add or edit parameters.

AMETEK APT ( Formerly Patriot Sensors) introduces a new family of Programmable Limit Switch Controllers. The Gemco Series 2500 incorporates years of application knowledge with state of the art technology. The 2500 is a modular designed unit with the main controller consisting of 8 inputs and 8 outputs and is expandable to 64 inputs and outputs. The 2500 gives the customer local control that is low in price, easy to set up, and flexibility to meet any application required. For example, if you want to run a packaging line at speeds that exceed the scan of the PLC, the 2500 is the answer. A 2500 has the operation interface and I/O combined. The customer simply wires the inputs and outputs, plugs in a resolver for rotary position, and then programs the unit by scrolling menus to select the desired function. In minutes you can be controlling up to 64 inputs and outputs at speeds of 100 microseconds.

The Series 2500 is ideal for stamping presses, gluing lines, packaging machines, labelers, material handling, bottle manufacturing, can manufacturing, and much more. If you are replacing cam boxes, older programmable limit switches, or have a new application, the 2500 is the answer. Standard features include: multiple programs, motion detection, "real language" display with help screens, program copy, input configuration for packaging or metal forming applications, brake monitor, and much more.

The operation interface has a two-line "real language" display that can be customized by the users. For example, where a traditional PLS would display "output 1,", the operator interface screen of the 2500 can read "glue gun 1," or anything else the user desires. Programming the unit is as simple as scrolling through the menu and adding or editing parameters. On-board help menus ensure rapid, accurate use by operators of all skill levels.

To lower the installed cost of a PLS system, AMETEK has also developed a line of compact, low-cost resolvers. The new 1986F and G Series resolvers can be ordered with a variety of outputs that make it a drop-in, pin-to-pin replacement for existing resolvers.
Share