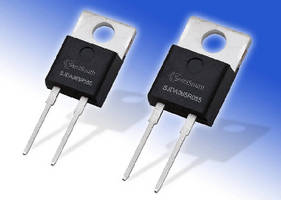 Dr. Jeffrey B. Casady, President/CTO of SemiSouth, commented: "Customers in markets such as EV drive train, UPS, welding, solar, induction heating have long been asking for SiC switches which are very reliable, cost-effective, and capable of high-efficiency at high power densities. We are proud to be the first company to be able to offer such a product and our customers will be able to realize enormous benefits by designing in these class-leading 650 V JFETs."

Dieter Liesabeths, Senior Vice President of Sales and Marketing added: "This product is very significant. Markets where we are already in volume production using our 1200 V switch such as solar and UPS, also require lower-voltage switching at 650 V for efficiency and higher power density solutions where grid voltage or bus voltages are lower. Also, the automotive industry is split on the EV drive train with some customers requiring 1200 V and higher, and others requiring only 650 V. So we can now serve these markets even better with power transistor solutions from 650 V through 1700 V."

The 650V/55mW SJDA065R055 SiC JFETs - like many SemiSouth devices - feature a positive temperature coefficient for ease of paralleling and extremely fast switching with no "tail" current at 150degC. RDS(on) typical for these new voltage-controlled devices is 0.044W, which also exhibit a low gate charge and low intrinsic capacitance.

Brenda Temple, Director of Inside Sales and Contracts