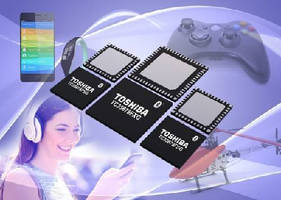 The new ARM® Cortex®-M0 based ICs combine an original low-power circuit design with the highly efficient DC-DC converter introduced in earlier products. This allows the chips to reduce current reduction by nearly 46 percent compared to the prior products, and to realize peak current consumption of 3.6 milliamps (mA) at 3V in transmitting mode.

The TC35679FSG is a mask-ROM-based product with no built-in Flash ROM and can achieve extremely low current operation by reducing current consumption that would be used for access to Flash ROM. Well-suited for applications with external host MCUs, it also supports external EEPROM over an I2C interface to support standalone mode. Accordingly, it can achieve long operating times for applications powered by small coin batteries. For example, using a CR2032 type coin battery, the new IC can carry out beacon operation for more than a year5.

All three ICs operate at voltage ranges of 1.8V to 3.6V and temperature ranges of -40ºC to 85ºC. The TC35678FSG and TC35679FSG are housed in 5mm x 5mm QFN40 packages. The TC35678FXG is a TC35678FSG repackaged in a 7mm x 7mm QFN60 package that extends the number of general-purpose I/Os from 16 to 32. It is suitable for equipment that requires a large number of control pins, such as keyboards and remote controls.

Samples of the TC35678FSG/FXG and TC35679FSG Bluetooth LE ICs begin shipping today. Mass production of TC35678FXG is scheduled to begin by the end of 2016; the other two ICs will commence mass production in early 2017.

2. Devices that adopt Bluetooth core specification ver.4.1 or higher with low-energy core configuration, and that use GATT-based architecture specified in Bluetooth ver.4.0

4. Products with the same ratings (current consumption of 3.6 milliamps (mA) at 3V in transmitting mode with 0dBm) are the lowest in the industry as of July 14, 2016, Toshiba survey

5. Calculated with a 220mAh battery and 2-second beacon interval time

The Bluetooth word mark and logos are registered trademarks owned by Bluetooth SIG, Inc.; Toshiba uses them under license.

ARM and Cortex are registered trademarks of ARM Limited in the EU and other countries.

© 2016 Toshiba America Electronic Components, Inc. All rights reserved. Information in this press release, including product pricing and specifications, content of services and contact information, is current and believed to be accurate on the date of the announcement, but is subject to change without prior notice.  Technical and application information contained here is subject to the most recent applicable Toshiba product specifications.