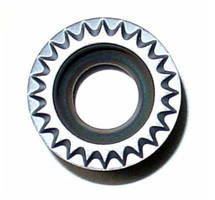 (LATROBE, PA) - The new Beyond(TM) line of high-performance turning products from Kennametal launched at IMTS 2008 included 11 new grades for improved productivity in steel, stainless steels, and cast-iron applications. Now the company is introducing KCS10, a new grade in MP (Medium Positive) geometry with the capability of improving titanium turning up to 50% while improving surface finish results and extending tool life. KCS10 features an MP geometry that has shown superior chip control in internal and field tests, with the results being a minimal number of cuts per edge and higher machine-tool speeds. "Compared to previous grades for turning titanium, users can increase speeds from 275 sfm to 335 sfm with KCS10, getting parts off faster and increasing their machine capacity," says Alexander Momm, global product manager, turning at Kennametal. "Where speed and capacity aren't the primary issues, aerospace job shops can run at lower speeds and extend their tool life with superior results in quality and surface finish." Tests have shown cycle-time reductions of 40%, saving up to an hour per part, depending on part configuration. "These faster results are also at an increased number of parts per edge and with excellent surface finishes," Momm adds. "Aerospace job shops that experience downtime due to chip-breaking problems with titanium can increase machine availability and attain new business with their existing equipment base. Shops forced to compete on price can add value and beat the competition with faster deliveries." MP geometry in KCS10 is available in six styles applicable to a wide variety of standard toolholders. For more information on Beyond and KCS10, visit www.kennametal.com. Kennametal Inc. (NYSE: KMT) is a leading global supplier of tooling, engineered components and advanced materials consumed in production processes. The company improves customers' competitiveness by providing superior economic returns through the delivery of application knowledge and advanced technology to master the toughest of materials application demands. Companies producing everything from airframes to mining equipment, from medical implants to oil wells and from turbochargers to motorcycle parts recognize Kennametal for extraordinary contributions to their value chains. Kennametal Inc., Latrobe, PA; (800) 446-7738.