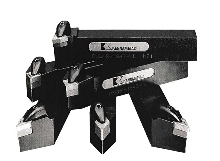 (Latrobe, PA) -- Kennametal has announced the metalcutting industry's fastest quick-change insert indexing system which requires only 1.5 turns of a single screw to remove or install a new insert. As opposed to conventional locking systems that require removal or insertion of both a clamp and a lockpin, the new Kenclamp system uses a single top-clamp for both location and locking. "The primary benefit of our new Kenclamp indexing system is that it enables inserts to be indexed up to 75% faster than conventional clamping systems," said Bob Jeffreys, Product Specialist for Kennametal. "It's also much faster than any other quick-change system on the market." Another advantage of the new indexing system is its use of Torx Plus hardware that delivers 25% greater torque and improves hardware life by up to 30%.

"Most of the time involved in indexing inserts with a conventional toolholder is tied up in manipulating the hardware," said Lee Yothers, senior engineer for Kennametal. "The operator first has to turn a screw several full revolutions in order to move the clamp. Then he has to loosen the lockpin. After changing the insert, he has to repeat this process in reverse. During this period the machine is sitting idle rather than making parts. The single screw clamping feature in our new Kenclamp system streamlines this process by allowing the insert to be removed or locked into place with just 1.5 turns of a single screw. As you tighten the screw, the clamp positions itself 0.005 inch above the insert. As you continue to tighten the screw, the pin on the nose of the clamp comes into contact with the hole in the insert. At the same time, the clamp foot contacts a ramp on the top of the toolholder and pulls the insert back into the pocket. Even competitive quick-change indexing systems that lock the insert with a single screw require at least twice as many turns."

A key feature of the new insert indexing system is its use of Torx Plus technology to provide additional clamping force. The Torx Plus drive features six lobes with large cross-sectional areas and an elliptically-based geometry that broadens the contact surface between the driver and screw to maximize torque transmission. The same features improve hardware life by as much as 30%. Compound angle ramps on the driver guide the bit into the recess, creating a self-centering action that makes it almost impossible to improperly insert the wrench. The Kenclamp design also has fewer moving parts versus competitive quick-change indexing systems. "Inventory savings can be achieved because there's less clamping hardware needed," Yothers said.

The new insert clamping system, available in 1/2 inch and 5/8 inch insert IC and 12 mm and 16 mm insert IC, is currently offered in square, 80 degree, 55 degree, triangular, and trigon insert shapes. Eventually, Kenclamp style toolholders will be available to handle nearly all turning operations. The new toolholders accept the same inserts as existing toolholders, making it easy to gradually convert to the Kenclamp system. The new toolholding system also offers the versatility of being able to remove the topclamp and secure the insert with an optional lockpin.
Share