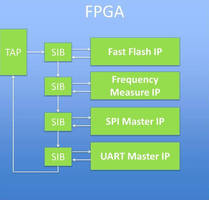 Available for design and manufacturing engineers, ScanWorksÂ® can reduce programming times from 10 or more minutes to 1 or 2 sec. FPGA-Controlled Test (FCT) tool inserts board tester with multiple instruments into functional FPGA, and high-speed programming engines, which utilize IEEE 1149.1 JTAG port on FPGAs, can load memories connected to FPGA. Solution can program diverse types of Flash memories, including NOR and NAND, as well as memory connected to FPGA via IÂ²C and SPI buses.

Richardson, TX — Programming memory in-system, or after the devices have been soldered to a circuit board, is the most efficient method, but the challenge for design and manufacturing engineers has always been the slow speeds of the process. Now, enhancements to ASSET® InterTech’s ScanWorks® platform for embedded instruments can speed up in-system programming by a factor of 1,000, reducing programming times from 10 or more minutes to one or two seconds. ASSET (www.asset-intertech.com) is a leading supplier of software and hardware debug, validation and test tools.

A block diagram of an FCT tester inserted into an FPGA can be downloaded from: http://www.asset-intertech.com/company/press/resources

The ScanWorks platform’s FPGA-Controlled Test (FCT) tool inserts a board tester with multiple instruments into a functional FPGA. The tester can then be used by design and manufacturing engineers. One of the new enhancements to ScanWorks FCT is the availability of high-speed programming engines which can load memories connected to the FPGA in a fraction of the time previously possible. ScanWorks FCT can program all sorts of flash memories, including NOR and NAND flash, as well as memory connected to the FPGA by the I2C and SPI buses.

“Most design and production engineers will say that the preferred way to program memory is in-system. Prototype boards are often produced before the system’s functional firmware is complete. Without in-system programming, a change in the software would mean de-soldering memory, programming it again and then re-soldering it to the board. Often, the devices or the board are damaged,” said Kent Zetterberg, ASSET’s product manager for ScanWorks FCT. “And in production, the software for some boards isn’t loaded until a customer orders a certain configuration of the system. Programming the memory in-system and at-speed is a tremendous benefit in both of these instances.”

The ScanWorks FCT high-speed programming engines take advantage of the IEEE 1149.1 JTAG port on FPGAs without some of its drawbacks, such as slow programming speeds caused by long scan chains. ScanWorks FCT and its programming engines are based on the IEEE 1687 Internal JTAG (IJTAG) standard which embeds a network of instruments in chips, including FPGAs, systems-on-a-chip (SoC) and others. This IJTAG network of embedded instruments can act as a shortcut into onboard memory devices to perform in-system flash programming much faster.

ASSET has posted a number of eBooks in its eResources Center on the topic of fast flash programming. One such eBook is titled “Faster Flash Programming via FPGA and IJTAG.”

The enhanced ScanWorks FCT is available now from ASSET InterTech and its distributors. Pricing starts with a $3,000 subscription.  For product information, call 888-694-6250, fax 972-437-2826, e-mail ai-info@asset-intertech.com or visit www.asset-intertech.com.

ASSET InterTech (www.asset-intertech.com) is a leading supplier of tools to debug, validate and test software and hardware. The company’s SourcePoint™ software debug and trace platform and ScanWorks® platform for embedded instruments work in tandem to give engineers real insight from code to silicon. SourcePoint is a best-in-class, powerful debugger that includes advanced trace tools to gather data from code and quickly debug complex embedded software systems. ScanWorks controls instruments embedded in chips to test and validate chips and circuit boards. Together they empower engineers with tools and technology for the entire life-cycle of a system, beginning with software and hardware development, on to design validation, through software/hardware integration, and eventually testing the product in manufacturing and field service. ASSET InterTech is located at 2201 North Central Expressway, Suite 105, Richardson, TX 75080.

ASSET, ScanWorks and the ScanWorks logo are registered trademarks, and Arium and SourcePoint are trademarks of ASSET InterTech, Inc. All other trade and service marks are the properties of their respective owners.
Share