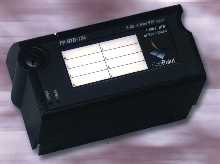 The new NI FP-RTD-124 module features eight input channels for direct connectivity to 4-wire 100 - platinum RTDs. Four-wire RTDs eliminate error caused by resistance in the RTD leads. This is important in applications where the sensor is mounted far away from the FieldPoint module. The FP-RTD-124 module features 16-bit resolution to take full advantage of this measurement accuracy and 50 and 60 Hz filtering to - reduce common-mode noise. The FP-RTD-124 module is ideal for applications that require temperature sensing throughout a process, such as controlling multistage heaters used in thermoplastics manufacturing.

The FP-RTD-124 works with FieldPoint Explorer, an easy-to-use software tool for configuring the parameters, such as temperature units, of each input channel. This module also works with the FieldPoint 2000 family, which uses embedded LabVIEW Real-Time programming for headless, stand-alone measurement and control applications. With National Instruments FieldPoint distributed I/0, engineers and scientists can easily integrate software and hardware for lower costs during program development, as well as the flexibility to meet changing application needs.

About NI
NI leverages commercial technologies, such as industry-standard computers and the Internet, to deliver customer-defined measurement and automation solutions. Headquartered in Austin, Texas, NI has more than 2,800 employees and direct sales offices in more than 37 countries. NI increases the productivity of engineers and scientists worldwide by delivering easy-to-integrate software and modular hardware. In 2001, the company sold products to more than 24,000 different companies in more than 60 countries around the world. For the past three consecutive years, FORTUNE magazine has named NI one of the 100 best companies to work for in America.

FieldPoint(TM), LabVIEW(TM), and NI(TM) are trademarks of National Instruments. Other product and company names listed are trademarks or trade names of their respective companies.