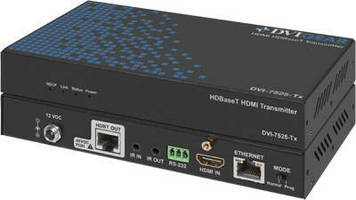 
Delivers a Major Breakthrough in Value for System Integrators

The DVI-7520 and DVI-7525 are among the first extenders on the market to offer a fully compliant implementation of "Power over HDBaseT" (POH), a key component of the HDBaseT standard.  To maintain system stability and compatibility, POH uses standardized 48 VDC power as well as a sophisticated handshake feature that prevents power exchange with incompatible devices.  Today there are many HDBaseT products on the market that utilize non-standard implementations of power over the HDBaseT link.  This problem has created numerous interoperability challenges for system integrators who are faced with HDBaseT products that do not work with each other or in some cases actually cause equipment failures.  "We felt that a fully compliant implementation of POH was the only solution to the growing problems caused by non-standard power in many HDBaseT products today," stated Steven Barlow, President of DVIGear.  "The architects of the HDBaseT standard wisely included this feature from the beginning and yet very few companies have included this crucial functionality in their product designs.  We think this will change in the future."

The DVI-7520 and DVI-7525 deliver a powerful combination of advanced features and sterling performance at very attractive price points, which make them a true break-through in value for professional AV system integrators.  This makes them ideally suited for a wide range of digital display applications including rental & staging events, conference and training rooms, boardrooms, auditoriums, hotels, churches and other demanding environments.  Both units are available now for immediate delivery.