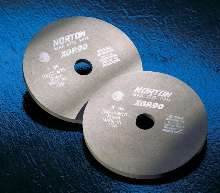 Series XGP.90 Wheels work on new and old equipment, and can be trued and dressed with either single-point diamond tools or rotary dressers. They are capable of generating 10 times more wheel life and same metal removal rates as other aluminum oxide grinding wheels. When grinding flute on 7.2 in. high-speed steel tool, XGP.90 grinding wheels produce 20 good tools per dress versus 6 for wheel previously used on part.

WORCESTER, Mass., June 25, 2004--XGP.90 wheels combine high-performance abrasives with the latest generation of vitreous bond. This advanced abrasive product is capable of generating 10 times more wheel life and the same metal removal rates of any conventional high-performance aluminum oxide grinding wheel currently available. The new XGP.90 wheels work on new and old equipment, and they can easily be trued and dressed with either single-point diamond tools or rotary dressers.

In on-the-job tests, Norton XGP.90 wheels significantly improved productivity while producing tools with tighter tolerances and less metallurgical damage. For example, when grinding a flute on a 7.2" high-speed steel tool, the Norton XGP.90 grinding wheel produced 20 good tools per dress versus six for the wheel previously used on the part. Plus, compensation per dress was reduced by 33 percent, extending wheel life and lowering the total cost of grinding the part by 75 percent. In a separate test, the new Norton XGP.90 precision wheel proved capable of grinding at a 25 percent higher infeed rate to significantly reduce cycle time, increasing productivity and lowering the cost per part without impacting part quality.

Norton is a brand produced by Saint-Gobain Abrasives, a division of Compagnie de Saint-Gobain. Saint-Gobain, one of the top 100 industrial companies in the world, is a leading producer of abrasives, building materials, flat glass, insulation, reinforcements, packaging, pipe, ceramics and high-performance plastics. Headquartered in Paris, Saint-Gobain's annual sales approximate $33.5 billion. The company has more than 170,000 employees in 46 countries. In the U.S. and Canada, Saint-Gobain employs about 26,000 people, and has 190 manufacturing locations. Its total U.S. and Canada sales in 2003 were $6.5 billion. Saint-Gobain's web site is www.saint-gobain.com.