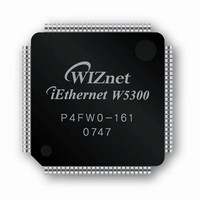 
Pittsford, NY: W5300 is a new, full-featured 10/100 Ethernet controller IC from WIZnet, three times as fast and with double the channels of its predecessor W5100.

W5300, with built-in MAC and PHY, offers stable speeds up to 50 Mbps - enough to watch movies in real-time rather than buffered. W5300 supports eight independent, simultaneous sockets, with a 16- or 8- bit data bus. W5300 is as simple to control as a memory IC and is capable of even supporting, for instance, simultaneous broadband access, VoIP, and digital broadcasting.

W5300 includes a fully hardwired TCP/IP core as well as a PHY interface layer and is designed for embedded applications where ease of integration, stability, high performance, size, and low system cost are important considerations. W5300 is a memory-mapped hardware TCP/IP solution that allows even low-end microcontrollers ready-made Internet capabilities at full speed with no need for additional PHY layer ICs.

W5300 allows engineers to off-load the burden of the TCP/IP stack into a second peripheral chip (complete with Ethernet MAC and PHY) with few peripheral components. This reduces product debug issues and speeds time-to-market with the design of the TCP/IP stack avoided, and the additional benefit of a more stable product. Simple 8-bit micros immediately have much more power since they no longer have the burden of TCP/IP protocols. TCP- offload improves overall system performance, reduces cost, power and size, increases robustness. Engineers no longer need to have detailed knowledge of TCP/IP since this is all accomplished within the W5300.