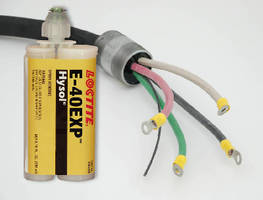 Designed to meet UL-674 requirements for explosion-proof motors, LoctiteÂ® E-40EXP(TM) maintains more than 85% of its compression strength following exposure to 13 harsh chemicals. Two-component compound is used to pot and seal wire conduits, isolating electric motor from hazardous vapors and chemicals that could cause explosion. Curing in approximately 2 hours at room temperature, material will not expand and experiences very little shrinkage, facilitating accurate dispensing.

Used to pot and seal wire conduits, Loctite® E-40EXP(TM) isolates the electric motor from hazardous vapors and chemicals that could cause an explosion. Clean and fast-curing, Loctite® E-40EXP(TM) can be used in any size fitting, potting or sealing application. The material will not expand and experiences very little shrinkage, facilitating accurate dispensing.

Loctite® E-40EXP(TM) is available either in user-friendly 2:1 static mix cartridges for easy dispensing or in bulk for high volume applications. This material cures in approximately 2 hours at room temperature and contains no carcinogens, ensuring worker safety.

In addition to motor applications, Loctite® E-40EXP(TM) is suitable for assembling or repairing pumps, fans, lighting, electrical connectors, sensors, and probes, or whenever chemical resistance or explosion-proof seals are required.